The formation of neural circuits in neurogenesis and during brain development is a one of the key problems of neurobiology. Disorders of axon navigation lead to the formation of an abnormal network structure and brain dysfunction, i.e. the absence or underdevelopment of the corpus callosum, L1 syndrome, Joubert syndrome, Kallmann syndrome and other disorders (Engle, 2010). The growth and navigation of axons during the development of the nervous system is a complex multistep process occurring under conditions of various types of structural and chemical anisotropy.

The interaction of growing axons with already formed network of other cells is an important process for proper connectivity formation in the brain. The processes of neighboring cells are used by neurons as a guidance for migration and axon navigation. In particular, during neocortex development, the processes of radial glial cells are used for migration of neurons to the upper layers. It is known that axons formed in early stage of the development influence axonal navigation of later growing neurons  (Eisen et al., 1986; Wang and Marquardt, 2013; Zhou et al., 2013; Cioni et al., 2018). For example, axo-axonal interactions form optic tract (Cioni et al., 2018) and the motor neuron connectivity (Eisen et al., 1986). Early formed projections of Cajal-Retzius cells from Dentate gyrus to entorhinal cortex provide a template for outgrowing entorhinal axons (Ceranik et al., 1999). In these case, the axons of new differentiated neurons interact with already grown axons and then grow predominantly in one direction: proximally or distally from the soma of the "guiding" axons.

Despite numerous studies of the navigation of neuronal cells processes, the mechanisms of such interactions during axon navigation are still not fully understood (Arlotta et al., 2005;  Fame et al., 2011; Greig et al., 2013;  Lodato et al., 2015). In particular, the mechanisms of axonal navigation are poorly understood in the early stages of development of the corpus callosum - the main commissure of the brain is necessary for highly specialized functions, such as speech processing (Josse et al., 2008; Hinkley et al., 2016). Experimental study of the axo-axonal interactions in vivo is exceptionally a difficult task due to the complexity of the brain organization and the continuous modulation of axonal growth by multiple chemical and physical factors of the environment.

In this study, we proposed a new method to mimic axo-axonal interactions in vitro in order to uncover mechanisms of axon navigation in such conditions.  We developed a microfluidic chip consists which consisted of two chambers with separate cultures. One chamber had two microchannels for “guiding” axons (guiding microchannels) and other chamber had ten perpendicular lateral channels for the “guided”axons. The microchannels had T-shape  intersection points where axons from two cultures interacted and “guided” axons had to change the growth direction either to a soma of “guiding” axons or opposite. We analyzed an efficiency of the method to obtain axon growth direction in several types of intersections and discussed further application of the method.

Microfluidic chips were made from biocompatible polydimethylsiloxane silicone (PDMS) using method of soft lithography (Fig. 1.a). A detailed description of the chip manufacturing method was explained in our early publication (Gladkov et al., 2017). The designed chip consisted of 4 chambers for cell cultures connected by microchannels. The height of the chambers for cell culture was equal to 200 μm. Round holes were punched in two opposite edges of the chambers to load a cell suspension.The height of the microchannels (3 μm)  prevented to enter the cell soma but was sufficient to grow the neurities.

The surfaces of the prepared PDMS chips were bonded to a cover glass (24 * 24 mm). The glasses were placed on a custom designed 6-well plate (see Gladkov et al.,2017 for more details).The PDMS chips coated with polyethyleneimine (1 μg / ml; Sigma P3143) for 80 minutes at 37 ° C for adhesion. 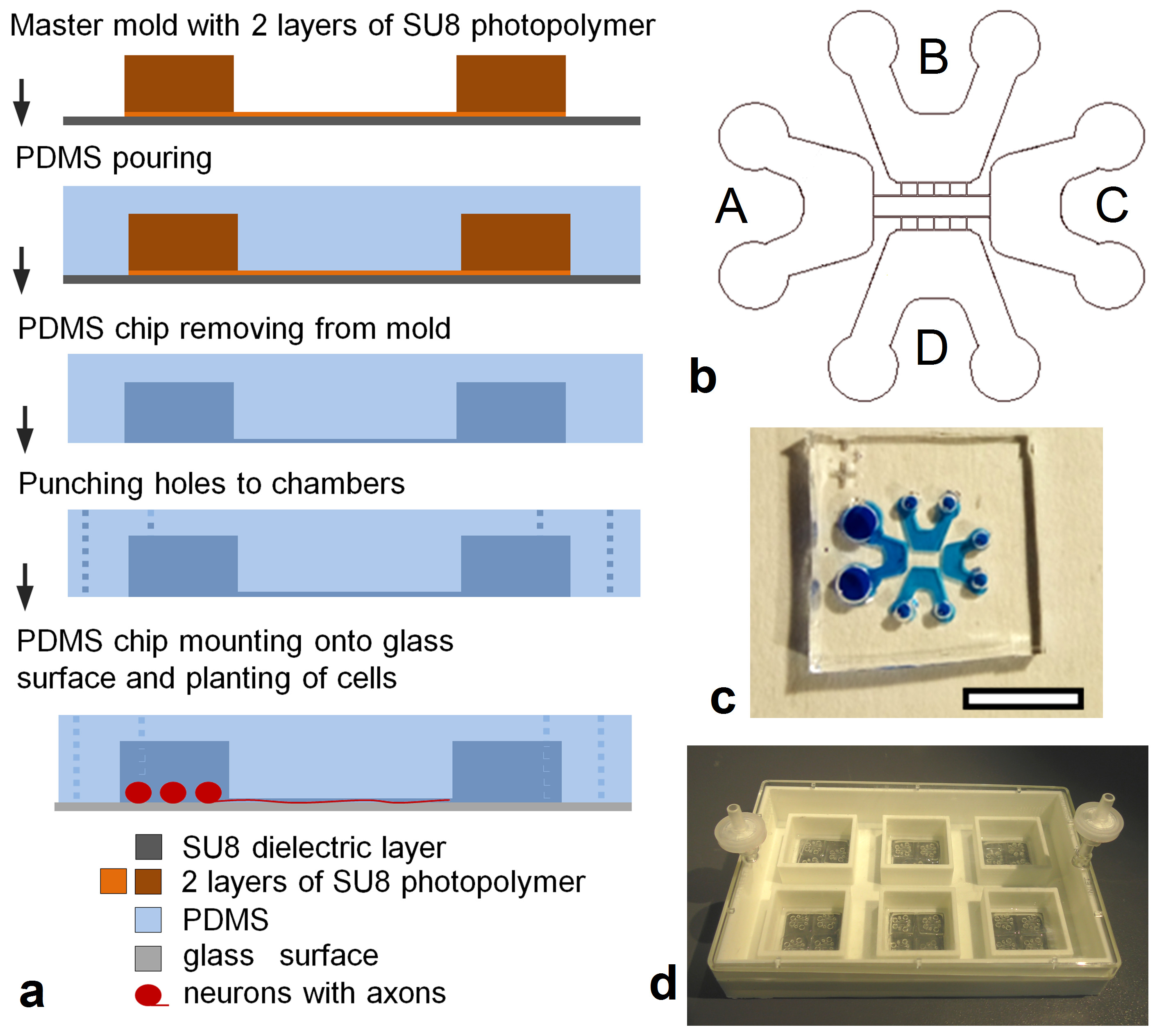 Neocortical cells were obtained from mouse embryos (E17-E18). The basic rules for the maintenance and care of experimental animals complied with the standards given in the manual «Guide for the Care and Use of Laboratory Animals» (ILAR publication, 1996, The National Academies Press), in the National Standard of the Russian Federation - GOST 33044-2014 «Principles of Good Laboratory Practice (GLP)», and were agreed with the Ethics Committee.

Cells were plated only in the chamber A of T-chips to analyze axon navigation in microchannels while passing through the T-shaped intersections. The scheme of the experiment is shown in Figure 2. To study axonal interactions at the intersection of microchannels, it is necessary that axons from chamber A grow along the channel to chamber C without turning into lateral channels. Axonal navigation was analyzed in microfluidic chips of two configurations. The first type contained intersections 20 µm wide, the second - 50 µm (fig. 2 a).

Fig 2. Scheme of experiment. a. The scheme of plating cells in chamier A for evaluating axon trajectory during the growth through a T-shaped intersection.

Neurite outgrowth dynamics was analysed with a system for the continuous monitoring of living cells in vitro (Cell IQ, ChipMan Technologies, Finland). The automatic system was used to monitor morphological dynamics of several cultures in the multi-well plates simultaneously in different regions. We started to monitor neurite growth 24 h after plating. The Cell IQ system continuously acquired phase contrast images with a ×20 objective (Nikon CFI Plan Fluorescence ELWD ADL, Japan) at interval of 20 min for each selected region. Data were processed and analysed with a Cell IQ Analyzer program.

where n(ΔT) is the number of intersec tions in which axon growth in the lateral microchannel at a certain time interval after axon grew to the intersection (ΔT); N is the total number of observed intersections. Pt indicated the effectiveness of the intersection to provide forward axonal growth.  N was 5 intersections when Pt was calculated for one experiment (one guiding microchannel). In some cases, the guiding axon did not grow to the last intersection, or the channel was partially blocked with debris. In such cases, N was less than 5.

Statistical difference was performed with Mann-Whitney test to compare two independent samples. P-value < 0.05 (∗) was considered as the significant difference.

Axonal growth  in a T-shaped intersection

The cultured neurons, within 2-4  h after plating, started to sprout neurites into the guiding microchannels. The axons grew to the first intersection at a distance of 566 μm from chamber A within 1–7 days from the moment of growth into the guiding microchannel or within 3–10 days from the day of cell plating. On average, the time of axonal growth until reaching each subsequent intersection increased by 1 day. 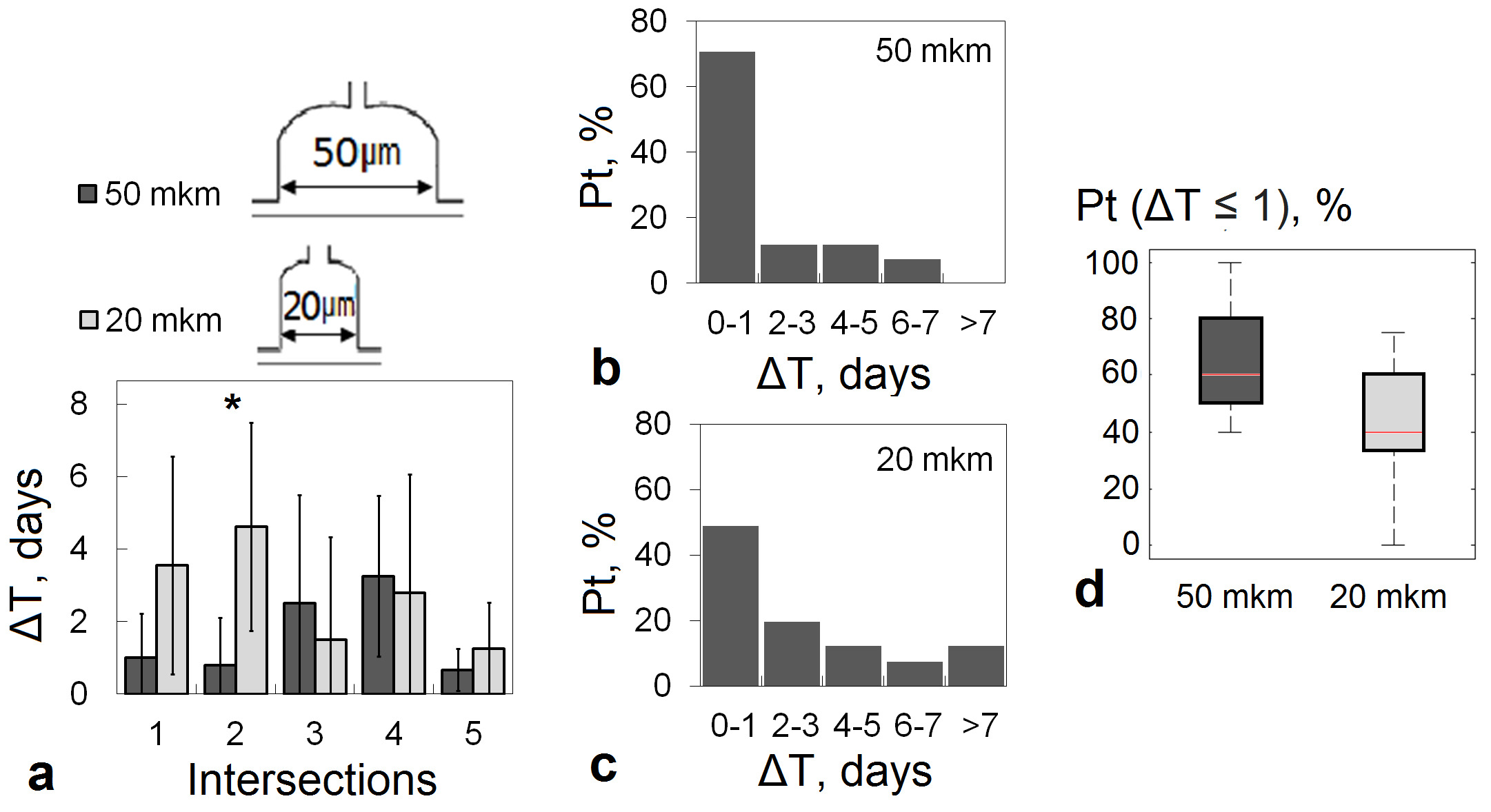 A temporary block of axon growth from chamber A to the lateral microchannel can increase the effectiveness of this experimental model in the future. This can be implemented, for example, using electrical stimulation and a collagen matrix (Honegger et al., 2013, 2016).

In this work, difference in the probability of axon growth in the lateral microchannel at the intersections of 50 and 20 μm was not significant. This could be due to large data variability. Nevertheless, a difference was found in the time intervals during which the axons growth only to the forward direction, after passing the intersections of 50 and 20 μm. The difference was found in the second intersection of microchannels at a distance of 707 μm from chamber A with cultured cells. These results indicate that narrow microchannels were more suitable for the axon grow only in the forward direction. Therefore, we plan to use narrow channels in works on the further development of the method of  the intersection of individual axons.

We proposed a concept to study axo-axonal interaction of the neurons growing from two cellular populations in vitro. Axons grow in perpendicular microchannels until it cross intersection where further axon behaviour can be analyzed n real-time.  The proposed approach can be used to study fundamental mechanisms of neocortex development, in particular the formation of the corpus callosum.

The reported study was funded by RFBR according to the research project № 18-34-00639.