Effects of Endocannabinoid-Related Compounds on the Activity of Septal and Hippocampal Neurons in a Model of Kainic Neurotoxicity: Study Ex Vivo

The goal of the work was to study the effect of the cannabinoid receptor agonist WIN55,212-2 and the cannabinoid type 1 receptor antagonist AM251 on electrophysiological changes in the hippocampus and the medial septal region (MS) induced by the intracerebral administration of excitotoxin kainic acid. Kainate injected into the right brain ventricle provoked persistent seizures (status epilepticus, SE) in all rats. A morphological analysis of the right hippocampus performed one month after the SE revealed the death of neurons, which was most pronounced in the hilus of the dentate gyrus and in the CA3a field of the dorsal hippocampus. In brain slices taken one month after the SE, the spontaneous activity of MS neurons and population EPSP (pEPSP) in the CA1 field of the hippocampus evoked by the stimulation of Shaffer collaterals (SC) was recorded; the changes in the activity were compared with the activity in slices of healthy animals injected with normal saline (“control slices”). It was found that the activity in MS slices from the brain of animals injected with kainic acid (“kainate slices”) was almost twice higher than in the control. After the application of WIN55,212-2, the frequency of discharges in the control did not change, whereas in kainate slices, the level of neuronal activity decreased to the control value. The application of AM251 led to an increase in the frequency of discharges in the control and its decrease in kainate slices. The registration of pEPSPs in the hippocampal slices revealed a twofold increase in the responses to SC stimulation in kainate slices compared with those in the control, i.e., an abrupt increase in neuronal excitability. A tendency for a decrease in excitability after the application of WIN55,212-2 and, conversely, for its increase by the action of AM251 was noted in evoked responses in the hippocampal kainate slices. Our results allow to assume the protective impact of cannabinoid agonist WIN55,212-2 on neuronal activity in the medial septum and hippocampus that disturbed by neurotoxic kainate influence.

Electrophysiological experiments
One month after the administration of normal saline or KA, electrophysiological experiments were carried out. The activity in the MS and the hippocampus were recorded first in the absence of any treatment (background) and then after the application of WIN55,212-2 and AM251.
Neuronal activity in MS
In MS slices, the activity of 23 neurons was recorded: 10 neurons in slices from animals injected with normal saline (“Control”) and 13 cells in slices from animals injected with KA (“Kainate”). The frequency of discharges of septal neurons in kainate slices was significantly higher compared with the control (6.12±1.02 vs. 3.39±1.12 imp/s, p<0.01). After the application of the agonist WIN55,212-2, the frequency of discharges in the control did not change significantly and was 2.16±1.15, whereas in kainate slices, it significantly decreased to 3.98±0.63 imp/s (p<0.01). Thus, after the application of cannabimimetic compound WIN55,212-2, the activity in the kainate slices approached that in the control. The application of the CB1 receptor antagonist AM251 led to oppositely directed changes in the two groups: an increase in the frequency of discharges in the control group (to 5.32±0.96, p<0.05) and its decrease in the kainate group (to 3.62±0.62, p<0.05) (Table 2).
Table 2. Effects of the cannabinoid agonist WIN55,212-2 and the CB1 receptor antagonist AM251 on the activity of MS neurons (frequency of discharges, imp/s) in survived slices one month after intracerebral (i.c.v.) administration of normal saline (“Control”) or kainic acid (“Kainate”)

Evoked activity in the hippocampus
Experiments were carried out on 8 slices from the brains of control animals and 12 slices from the brains of animals injected with kainate. To assess the functional status of presynaptic afferents following SE, the FV amplitude (Fig. 2B, left) was measured at the level of each stimulus intensity, and the resulting I-O curve for each slice was fit with a sigmoidal equation (Table 3; Fig. 2B,C). Averaged pEPSP slope measures were then plotted against their corresponding FV amplitudes (Fig. 2B, center, right). The degree of the excitability of hippocampal neurons after the stimulation of SC was estimated from the slope of the front of pEPSP at differnet levels of fiber activation, which is described by the sigmoidal function as well. In this case, a higher incline of the sigmoidal curve, determined by maximal curve amplitude, intensity of stimulus (or FV amplitude) for half-maximal response and slope of the curve, was the indicator of an excitability in this communication system (CA3-CA1) (see Table 3).
Table 3. The effects of cannabinoid drugs on the evoked activity in the hippocampus one month after the intrabrain administration of normal saline (“Control”) or kainic acid (“Kainate”). I-O curve coefficients for fiber volley versus stimulus intensity, and pEPSP slope versus fiber volley are presented. Explanations in the text.

In our experiments, it was revealed that stimulus intensity sufficient for half-maximal fiber response was significantly lower in kainate slices compared with control ones (p<0.01) (Fig. 2B, left), suggesting higher excitability on presynaptic level. The lower curve slope in kainate slices could be explained by early saturation of sigmoidal dependency, at a comparable level of maximal response.
Similar changes were observed in pEPSP slope curve plotted against FV. Additionally, the maximal amplitude of postsynaptic response in kainate group was twice higher than in control (Table 3). Thus, the fiber excitability and synaptic strength in CA3-CA1 connections markedly increased in kainate animals. 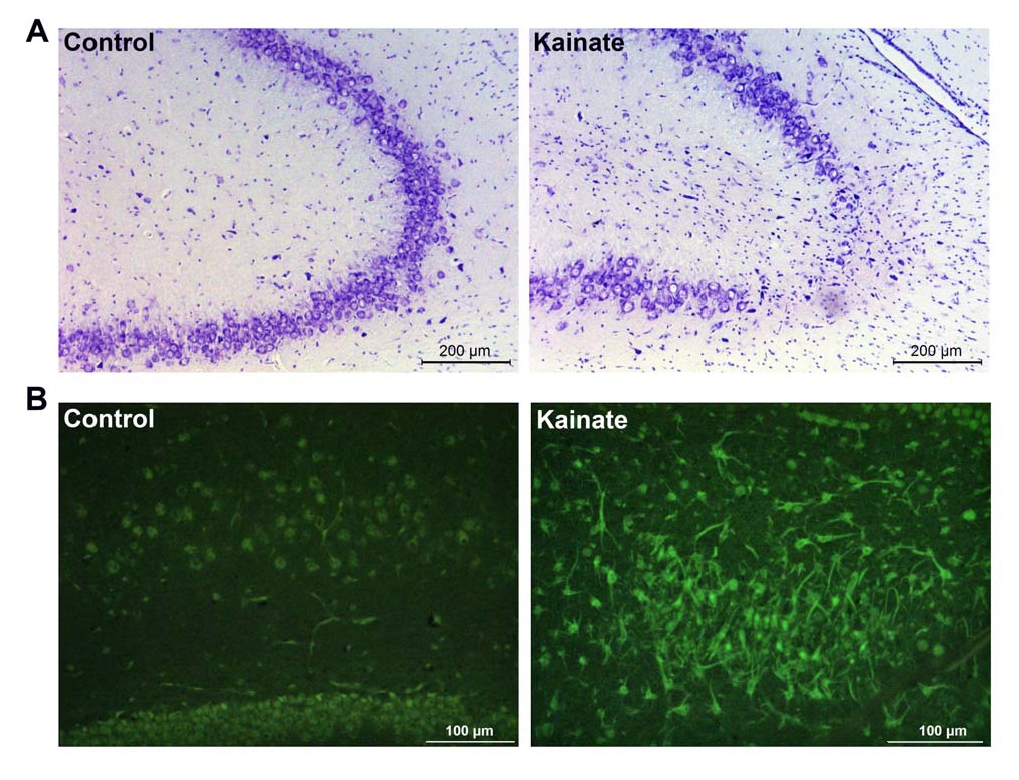 Figure 1. Representative microphotographs demonstrating degenerative changes in rat hippocampus one month after intrabrain (i.c.v.) injection of kainic acid. (A) Neurons of CA3a field of dorsal hippocampus (Nissl staining). (B) Cells of hilus of dentate gyrus (Fluoro-Jade В staining). In A and B, control (on the left) and kainate slices (on the right) are shown.
Effects of WIN55,212-2 and AМ251 on the evoked activity in the hippocampus
The effect of cannabinoid compounds was estimated by comparison of I-O curves before and after their application. The effect of WIN55,212-2 and AМ251 on the rate of “saturation” of responses (achievement of the plateau) was evaluated. CB receptor activation or inhibition did not change the I-O dependency of FV in control slices (Fig. 2B). After the application of WIN55,212-2 to kainate slices, the curve more rapidly reaches the plateau, due to significant increase of curve slope and a decrease of maximal amplitude parameters (p<0.05, compared to background) (Fig. 2B,C). 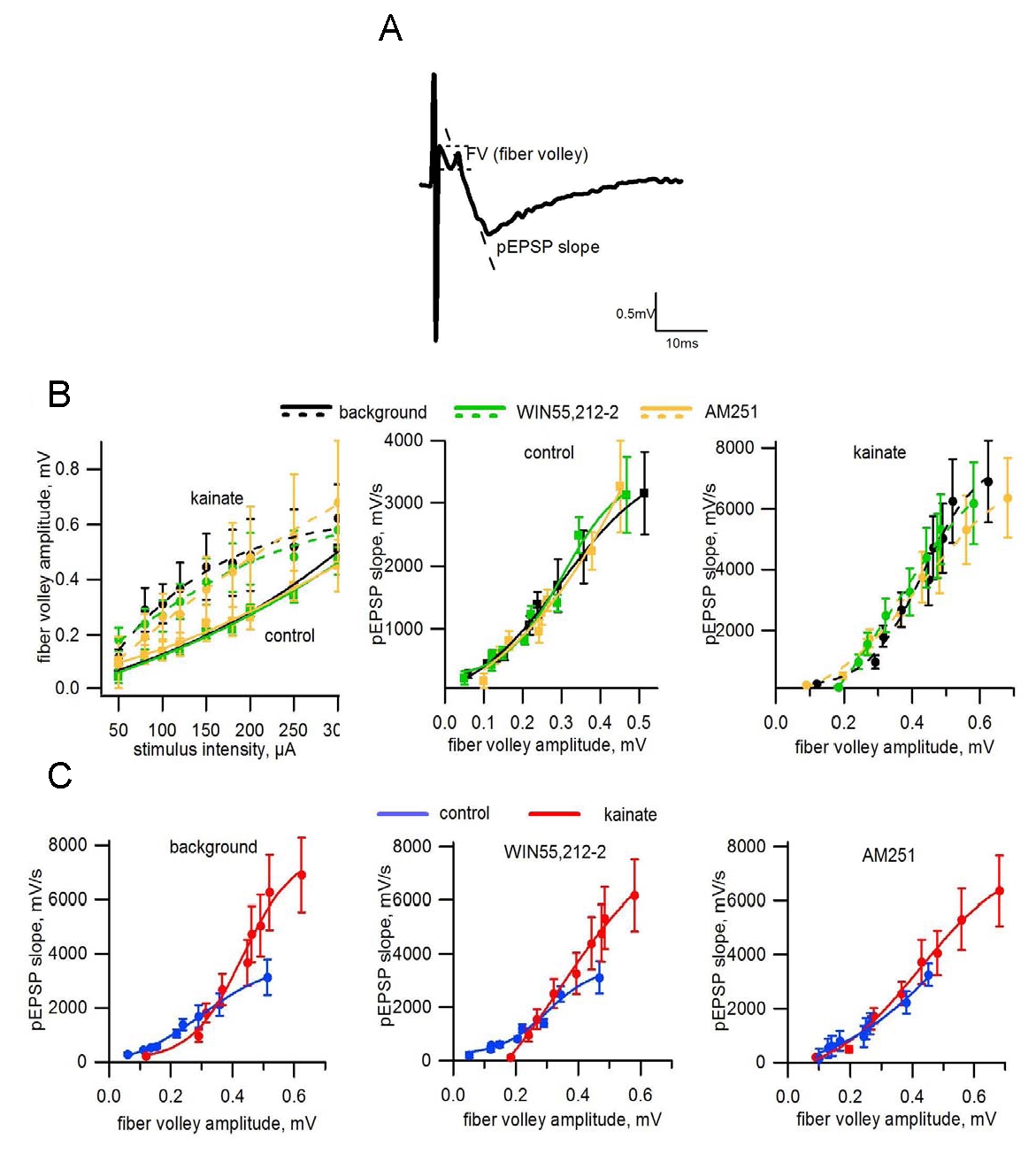