Understanding the molecular and cellular processes that cause dementia is one of the most important challenges in neuroscience. SUMOylation is a post-translational protein modification that has been strongly implicated in neurodegenerative diseases. To investigate SUMOylation in dementia we profiled the expression of key SUMOylation pathway proteins in post mortem brain tissue from Alzheimer’s Disease (AD) and Down’s Syndrome (DS) patients. As expected, both AD and DS tissue displayed massively increased levels of phosphorylated tau compared to age- and sex-matched controls. Surprisingly, there were no changes in the levels of the E1 and E2 enzymes required for protein SUMOylation, or in levels of the deSUMOylating enzyme SENP1.  There was, however, a marked decrease in the SUMO-2/3-specific deSUMOylating enzyme SENP3 in DS. There were also increased levels of SUMO-1 conjugated proteins in DS, but not in AD tissue. While these results do not exclude roles for SUMOylation in AD, they demonstrate clear differences in the profile of SUMOylation and in the expression of deSUMOylating enzymes between AD and DS brain.

We obtained brain samples from the BA10 region of the anterior prefrontal cortex from 20 AD patients, 9 DS patients, and corresponding age- and sex-matched controls. Tissue homogenates were prepared from these samples, prior to analysis by Western blotting. We first validated the disease phenotype in post mortem samples by measuring levels of phosphorylated tau, which is a well-established marker for AD and DS pathology (Wiseman et al. 2009, Di Domenico et al. 2013). In agreement with previous reports, we observed a >10-fold increase in phospho-tau in both AD and DS patients compared to age-matched controls (p=0.0022 and p=0.0021, respectively).
There was also a significant increase in total levels of tau in DS (p=0.02), but not in AD samples. Consistent with the fact that APP is encoded on trisomic chromosome 21, APP was increased in DS samples (p=0.002) but unchanged in AD samples (Fig. 1, 2). 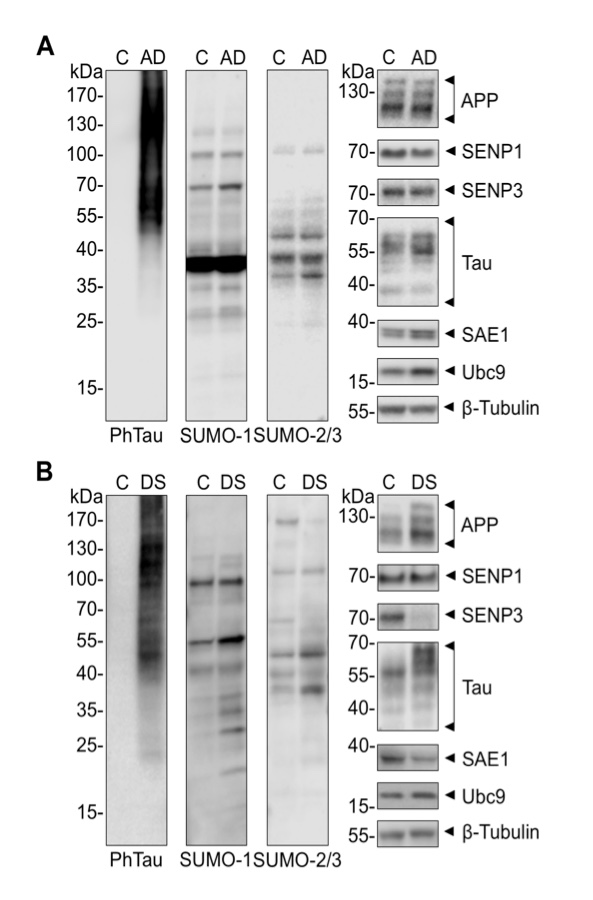 Contrary to our initial expectations, total levels of the E1 SUMO activating enzyme subunit SAE1 and the E2 conjugating enzyme Ubc9 were unchanged in diseased versus control BA10 samples (Fig. 1, 2). Notably, while there were no changes in the deSUMOylating enzymes SENP1 and SENP3 in AD, there was a significant decrease in SENP3 (p=0.01) in DS tissue.
Furthermore, no significant differences in the total levels of free SUMO-1 or SUMO-2/3, or in the overall patterns of proteins conjugated to SUMO were detected in AD samples. Intriguingly, however, there was a significant increase in SUMO-1 (p=0.02), but not SUMO-2/3, conjugates in DS samples. At first sight this is unexpected since SUMO-3 is encoded on chromosome 21 (Hattori et al. 2000), and SUMOylation by SUMO-2/3 has been reported to be increased in DS (Gardiner 2006). However, this study only examined one control and one DS case, in contrast to the 9 control versus 9 DS analysed here. Our data suggest that SUMO-3 trisomy does not influence the steady-state level of SUMO-2/3 modification, however, this may potentially be explained by recent data suggesting that SUMO-2 is the predominant SUMO-2/3 isoform, at least in mice (Wang et al. 2014). As a result, the increased SUMO-3 may not be observed in DS since it still remains a relatively minor proportion of the total SUMO-2/3 protein present. We were unable to examine levels of SUMO-4 or the recently reported SUMO-5 paralogues (Liang et al. 2016) due to the lack of antibodies specific to these proteins. However, since the importance of SUMO-4 as a genuine ubiquitin-like modifier protein has been questioned (Owerbach et al. 2005) and SUMO-5 expression is not detectable in brain (Liang et al. 2016), it seems unlikely that these proteins play a major role in the pathology of AD or DS. 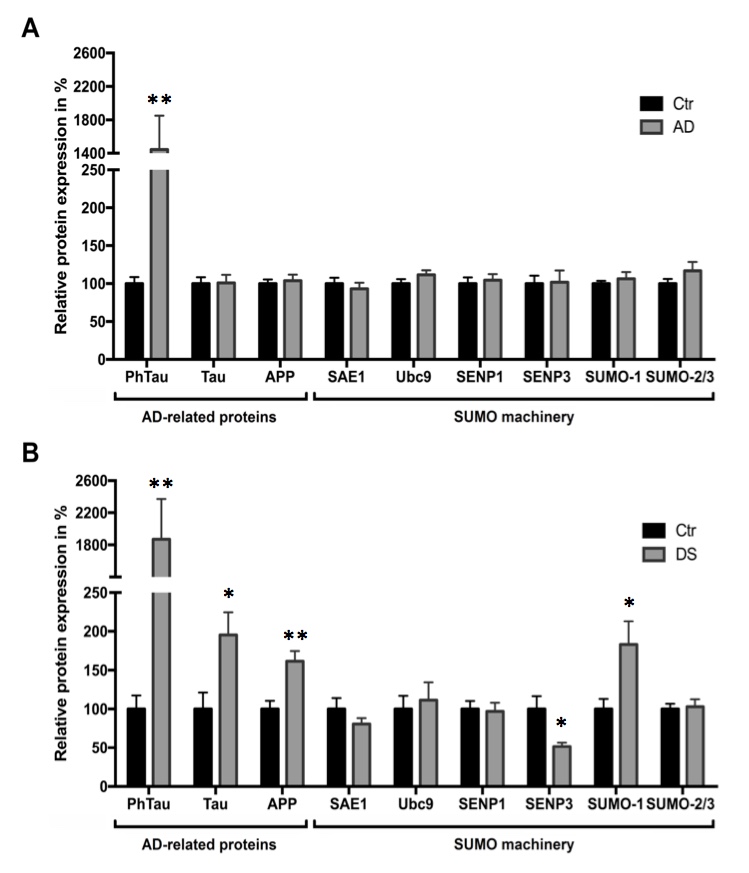 Figure 2. Histogram demonstrating normalised levels of the indicated proteins in BA10 samples taken post mortem from AD (A), DS (B) and control samples. (A) Quantification of the expression levels of the proteins of interest after normalising to the neuron-specific loading control β-tubulin III. Phosphorylated tau is significantly increased (p=0.0022) in BA10 of AD compared to control patients. No significant changes in tau, APP or SUMO machinery proteins (SAE1, Ubc9, SENP1, SENP3, SUMO-1, SUMO-2/3) were observed (p>0.05, n=20, unpaired two-tailed student’s t-test). Data presented as mean + SEM with the mean of the control group set to 100%.(B) Proteins of interest were normalised to corresponding β-tubulin III levels and quantification showed a significant increase of phospho-Tau (p=0.0021), tau (p=0.02), APP (p=0.002) and SUMO-1 (p=0.02) in DS compared to control samples, whereas SENP3 was found to be significantly decreased (p=0.01).

Our initial hypothesis was that, because SUMOylation has emerged as an important regulator of synaptic and neuronal function and dysfunction, the SUMOylation machinery would be altered in AD and DS brain (Guo and Henley 2014, Henley et al. 2014). To our knowledge this is the first investigation of protein SUMOylation in DS and we observed a significant increase in SUMO-1 conjugation and a loss of the SUMO-2/3 deconjugating enzyme SENP3. At first sight this is surprising since the loss of SENP3 would be expected to correlate with an increase in SUMO-2/3 conjugation rather than SUMO-1. However DS is a complex disease and we attribute the change in the steady-state level of SUMO-1 conjugation to other mechanisms. In addition, while we did not observe global changes in SUMO-2/3 conjugation, we did observe changes in the level of some SUMO-2/3 modified substrates at ~170kD (p=0.03, Fig. 1). Moreover, the loss of SENP3 will alter the SUMOylation status of individual substrates that may not be apparent by Western blotting for global SUMOylation levels. Relevant to this, we have previously shown that, during ischemia, SENP3 is rapidly degraded, and that this promotes cell survival upon reperfusion by promoting SUMOylation of the SENP3 substrate Drp1 (Guo et al. 2013). Taken together our data suggest that, similar to ischemia, the cell stress associated with dementia in DS may lead to a loss of SENP3, potentially as part of a neuroprotective stress response.
To further examine the link between phospho-Tau, total Tau and APP markers of disease pathology and the changes observed in DS brain, we examined correlation between these sets of proteins in the data from the control and DS patients (Fig. 3). Interestingly, we observed a significant positive correlation between levels of Tau expression and SUMO-1 conjugation. However, it is important to note that this does not necessarily indicate a direct causal link between increased Tau levels and SUMO-1-ylation in DS, and further work will be required to investigate this link. Nonetheless, in AD, where Tau levels were unchanged, we did not observe any changes in total SUMO-1-ylation, consistent with this possible relationship. 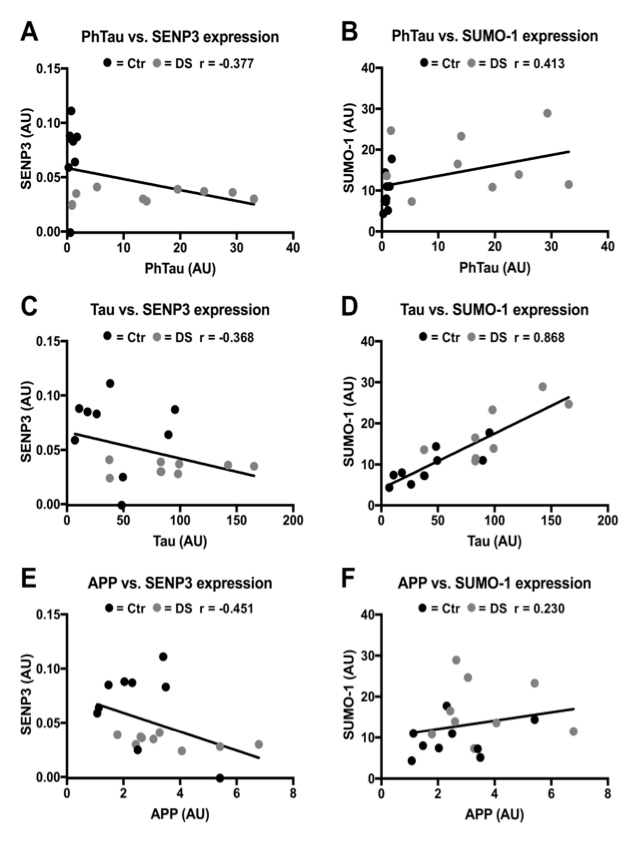 In contrast to DS, neither SUMO substrate conjugation nor SUMO conjugating and deconjugating enzymes were changed in AD. Indeed, these results are broadly in line with previous data on SUMOylation and selected SUMO enzyme levels in transgenic mice overexpressing APP (McMillan et al. 2011).
Unlike DS, which has a readily identifiable genetic cause, AD is a heterogeneous group of diseases with a diverse range of potential underlying factors. Consistent with this diversity, we observed large variation between the individual AD samples reflecting the heterogeneity of the disease. Thus, it is likely that only very large and robust changes associated with common pathways in all forms of AD will be detected in post mortem tissue.
These results are supported by a recent report showing that there is no change in Ubc9 or SUMO-1 levels in AD (Lee et al. 2014). However, that study observed a significant decrease in protein SUMOylation by SUMO-2/3 in AD hippocampus. There are several possible reasons for these apparent differences. The sample size in that study was relatively small, comprising hippocampal samples from only 6 controls and 6 AD samples and they used β-actin as a loading control (Lee et al. 2014). However, it is important to note that our study examined cortex rather than hippocampus and used a much larger sample size (20 AD and 20 control brains), which may partially explain the differences in our observations.
It is important to emphasize that although we observed no significant differences in total levels of the subset of SUMO pathway conjugating and deconjugating enzymes examined in AD samples, the lack of change in expression does not necessarily indicate that the SUMOylation pathway is unaffected in this disease. We are assessing enzymes, and it is the conjugating and catalytic activity that is critical in determining the levels of SUMOylation and deSUMOylation of substrate proteins. Thus, it remains possible that the activity or localisation of the proteins and enzymes involved might be drastically changed even if their expression is unaltered. Furthermore, in terms of levels of substrate SUMOylation, we can only assess the overall patterns and total levels of substrate modification by SUMO paralogues. In this study we do not address modification of individual substrates, and it needs to be kept in mind that the SUMOylation status of key individual substrates may be dramatically altered, even in the absence of gross changes in global SUMOylation levels.
In summary, we compared post mortem brain samples from patients who died with AD or DS to age- and sex-matched control samples from patients who died of unrelated causes. Our hypothesis was that, because of the emerging key role of post-translational protein modification by SUMO in regulating synaptic function and health, the SUMO pathway might be profoundly affected in AD and/or DS pathology. Our results suggest that although there are some differences in protein SUMOylation and enzyme levels in DS, in AD in particular there is little evidence for major alterations in the levels of the enzymes that regulate protein SUMOylation. We note, however, that our data do not exclude key changes in the SUMOylation status of specific substrate proteins in the onset and progression of the synaptic deficiencies associated with DS and AD.

We would like to thank the South West Dementia Brain Bank (SWDBB) for providing brain tissue for this study. The SWDBB is supported by BRACE (Bristol Research into Alzheimer's and Care of the Elderly), Brains for Dementia Research and the Medical Research Council. We also thank Prof. Ron Hay (University of Dundee) for the gift of the sheep polyclonal SUMO-2/3 antibody. CSB is a BRACE-funded PhD student and MJH is an Alzheimer’s Society-funded PhD student. This work was supported by research funding from the MRC, BRACE and the Alzheimer’s Society.