1 A. A. Bogomoletz institute of physiology, NAS of Ukraine, 01024 Kiev, Ukraine;
2 Dnipropetrovsk medical academy of Ministry of public health of Ukraine, Dnipro, Ukraine.

This review focuses on temperature dependence of biophysical properties of ion channels of other than TRP types. Some functional consequences of the channels temperature sensitivity for neuronal excitation in health and disease are considered. 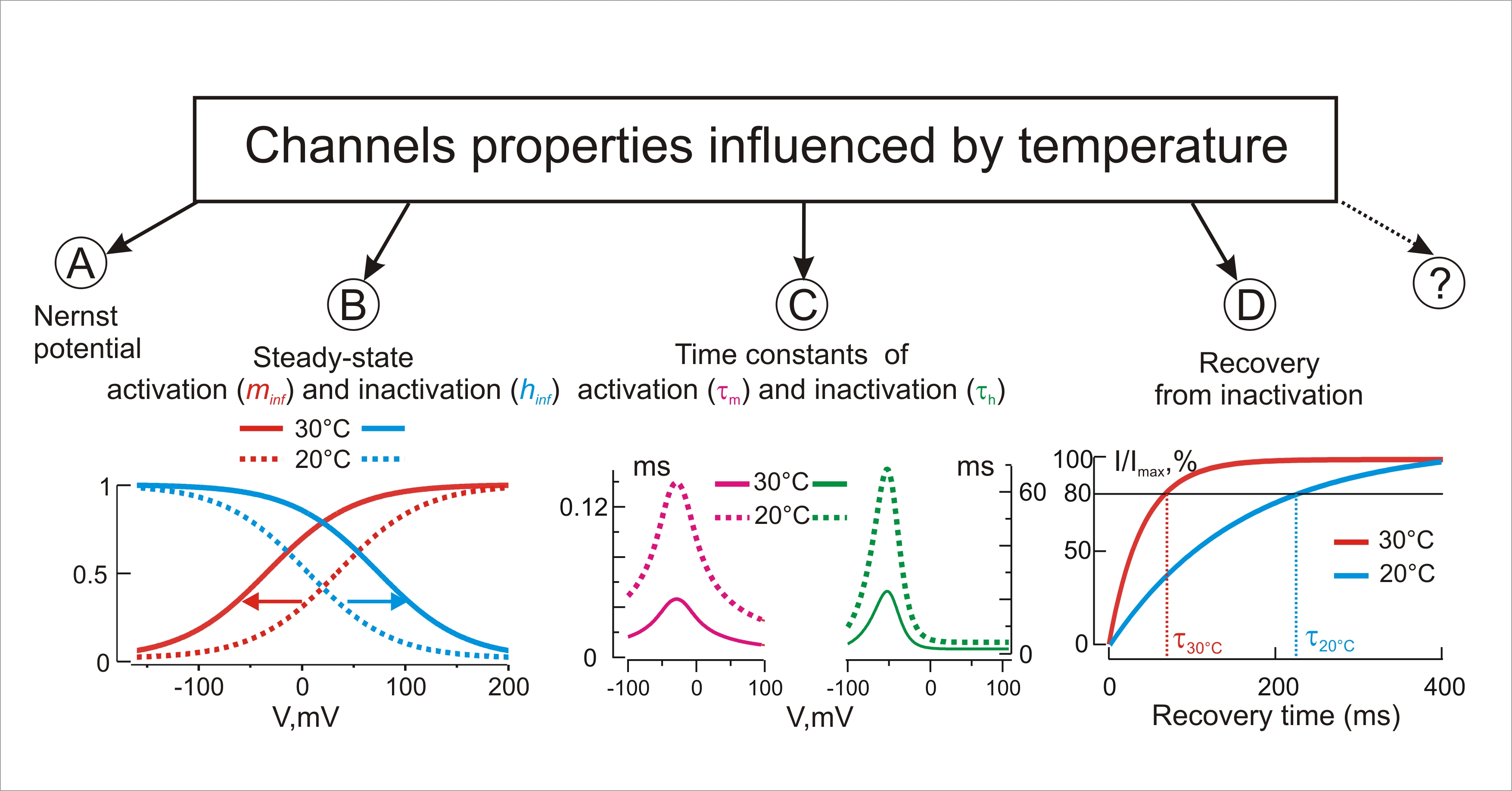 Figure 1. Temperature influences the Nernst equilibrium potential (A), steady-state kinetics (B) and time constants (C) of activation and inactivation, recovery from inactivation (D), and, possibly, other yet unknown biophysical properties of channels.
Functional implications of channels thermosensitive properties in health and disease
Temperature dependence is inherent in practically all type ion currents as corresponding current-conducting channels change their biophysical properties with temperature. These changes are quantitatively characterized by the temperature coefficient Q10. It can be calculated as the relative increase in current amplitude at a specific voltage when temperature increases by 10 degrees, i.e. as Q10 = IT+10/IT. Q10≥5 was proposed as a criterion for distinguishing thermosensitive TRP channels (thermoTRPs) from the whole TRP family (Voets, 2012). According this criterion some non-TRP channels also can be have qualified as highly thermosensitive as they have Q10≥5 (e.g. CLC , ANO1 (Pusch & Zifarelli, 2014). Unlike channels, there is no generally admitted criterion for distinguishing a thermosensory unit at the level of individual neurons. We consider that expression of channels with so high Q10 by itself is necessary but not sufficient for a neuron to function as a thermosensory unit. Our suggestion is supported by known expression of highly thermosensitive TRPV1 and TRPM8 channels in neurons, which do not function as thermosensors. Expression of the high-Q10 channels must be sufficiently high for providing a steep temperature dependence of a neuron reaction (e.g. firing rate) to changes in temperature. Neurons, which are not high-thermosensitive in health can become such in result of channelopathy that leads to development and maintenance of pathological states (febrile seizures). However, implications of existing temperature dependence of CLC proteins, which mediate Cl− transport, are unknown (Pusch & Zifarelli, 2014). This is also true in case of mechanosensitive Piezo-1 and Piezo-2 channels clearly displaying temperature dependence  (Coste et al., 2010).
Physiological functions
Central thermodetection
Participation of TRP channels in thermoregulatory responses of neurons in the preoptic area and anterior hypothalamus (PO/AH) is disputed. On the one hand, mechanism for PO/AH neuronal warm sensitivity was attributed to thermosensitive TRPV4 channels (Caterina et al., 1997; Güler et al., 2002; Patapoutian, Peier, Story, & Viswanath, 2003). On the other hand, Wechselberger and co-authors (Wechselberger, Wright, Bishop, & Boulant, 2006) showed the absence of TRPV4 channels expression in PO/AH neurons and, in the simulation study, they demonstrated that the potassium leak and hyperpolarization-activated cationic channels (HCN) determined warm-induced responses of PO/AH neurons. Recent study (Kamm & Siemens, 2017) demonstrated that other type TRP-channel, namely TRPM2 is involved in thermoregulatory responses of PO/AH neurons. They showed that heat (>37 °C) responses of POA neurons were significantly reduced in TRPM2-deficient mice compared to wild-type ones. Two-pore potassium channels, namely TREK are also involved in thermoregulatory responses of neurons in PO/AH. TREK are activated by heating and thus inhibit depolarization of these PO/AH neurons (Maingret et al., 2000).
Peripheral thermodetection
Cold reception. It is generally thought that activity of TRPM8 and TRPA1 channels underlies sensitivity of PANs to innocuous and noxious cold, respectively, while the role of other channels is underestimated. For instance, in cold nociceptor neurons, cooling progressively enhances the voltage-dependent slow inactivation of TTX-sensitive sodium channels, whereas the inactivation properties of TTX-insensitive Nav1.8 channels are entirely cold-resistant. The observation that Nav1.8-deficient mice show negligible responses to noxious cold and mechanical stimulation at low temperatures suggests that Nav1.8 remains available as the sole electrical impulse generator in nociceptors that transmits nociceptive information to CNS (Zimmermann et al., 2007). Decreased activation of TREK-1 potassium channels at low temperatures reduces their contribution of the membrane hyperpolarization and thus promotes the depolarization of receptor endings of cold PANs (Maingret et al., 2000).
Warm reception. Activity of vast majority of ion channels is increased and/or accelerated with increasing temperature. This was shown for practically all type channels conducting the depolarizing currents. In case of the hyperpolarizing current conducting channels this property was demonstrated only for the two-pore potassium (K2P) ones. Moreover, K2Ps may lose selectivity to potassium under physiologically relevant conditions that may turn them into a heat-activated excitatory ion channel similar to TRPV1, i.e. its own functional antipode. In PANs from TRV1-KO mice, APs generation in response to ramp-heating was attributed to presence of high temperature-sensitive (Q10 ~20) Ca2+ activated chloride channels of ANO1-type (Cho et al., 2012).
Role in neuropathology
The role of ion channels of other than thermoTRP types in temperature dependence of pathological processes was shown for development and treatment of neuronal hyperexcitability. On the one hand, NaP with mutated β1 (C121W) subunit shows high temperature sensitivity by widening window current which is one of the possible mechanism of febrile seizures (Egri et al., 2012). On the other hand, it’s known that therapeutic hypothermia suppresses excessive excitability of cortical neurons involved in generation of epileptiform EEG patterns (Motamedi, Gonzalez-Sulser, Dzakpasu, & Vicini, 2012). In our recent model study (Demianenko, Poddubnaya, Makedonsky, Kulagina, & Korogod, 2017) we demonstrated cooling induced deactivation of termoTRP can be a mechanism of suppression of bursting activity of neurons underlying synchronized epileptiform network activity. But role of other non- thermoTRPs is not sufficiently disclosed until now. Heat, voltage, and Ca2+ synergistically sensitize each other’s effects on ANO1. Normally, ANO1 are activated by noxious heat. However, temperatures lower than 44 °C also can activate ANO1 at physiological membrane potentials because [Ca2+]i increases under pathological conditions such as inflammation (Cho et al., 2012). 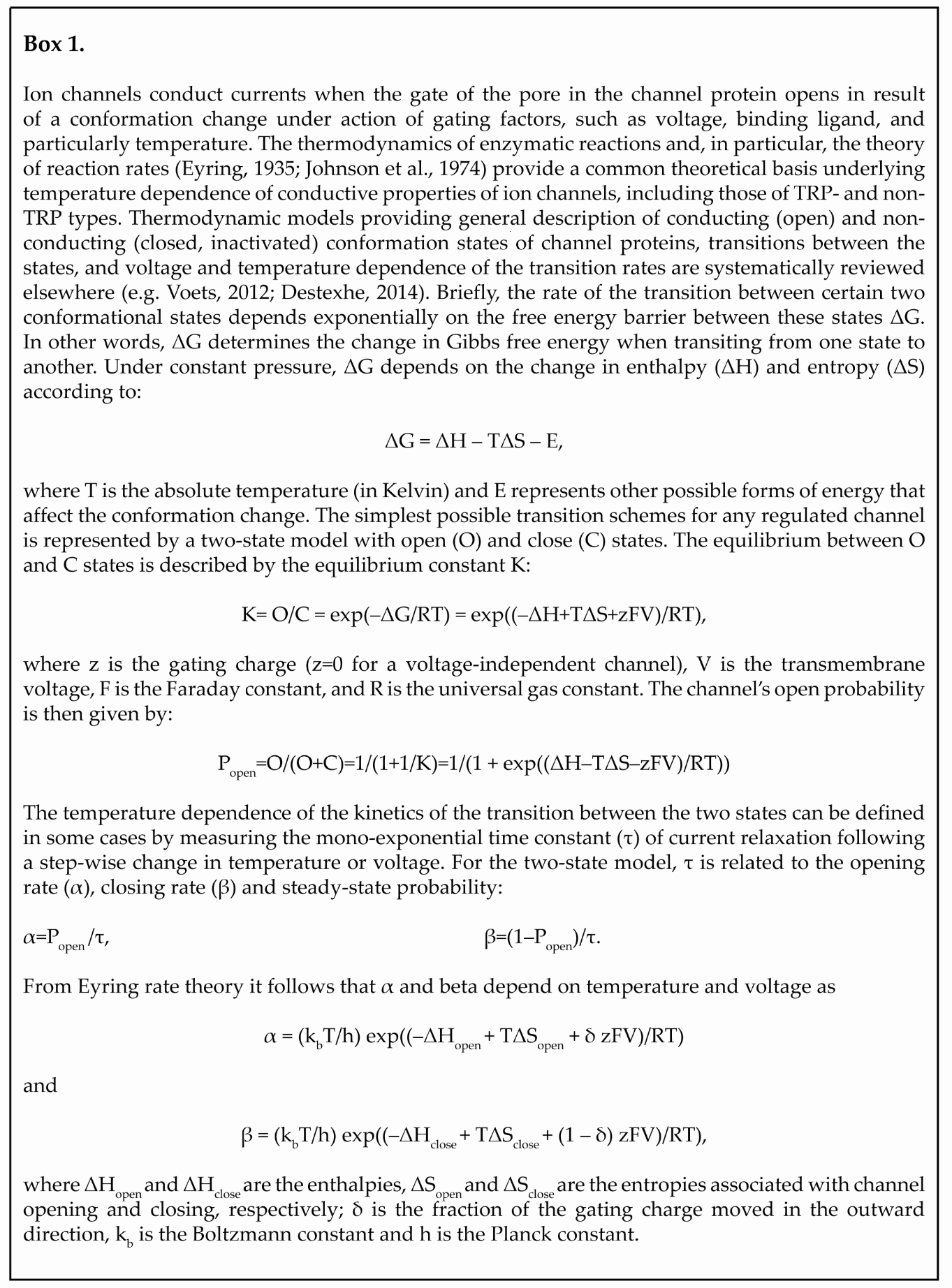 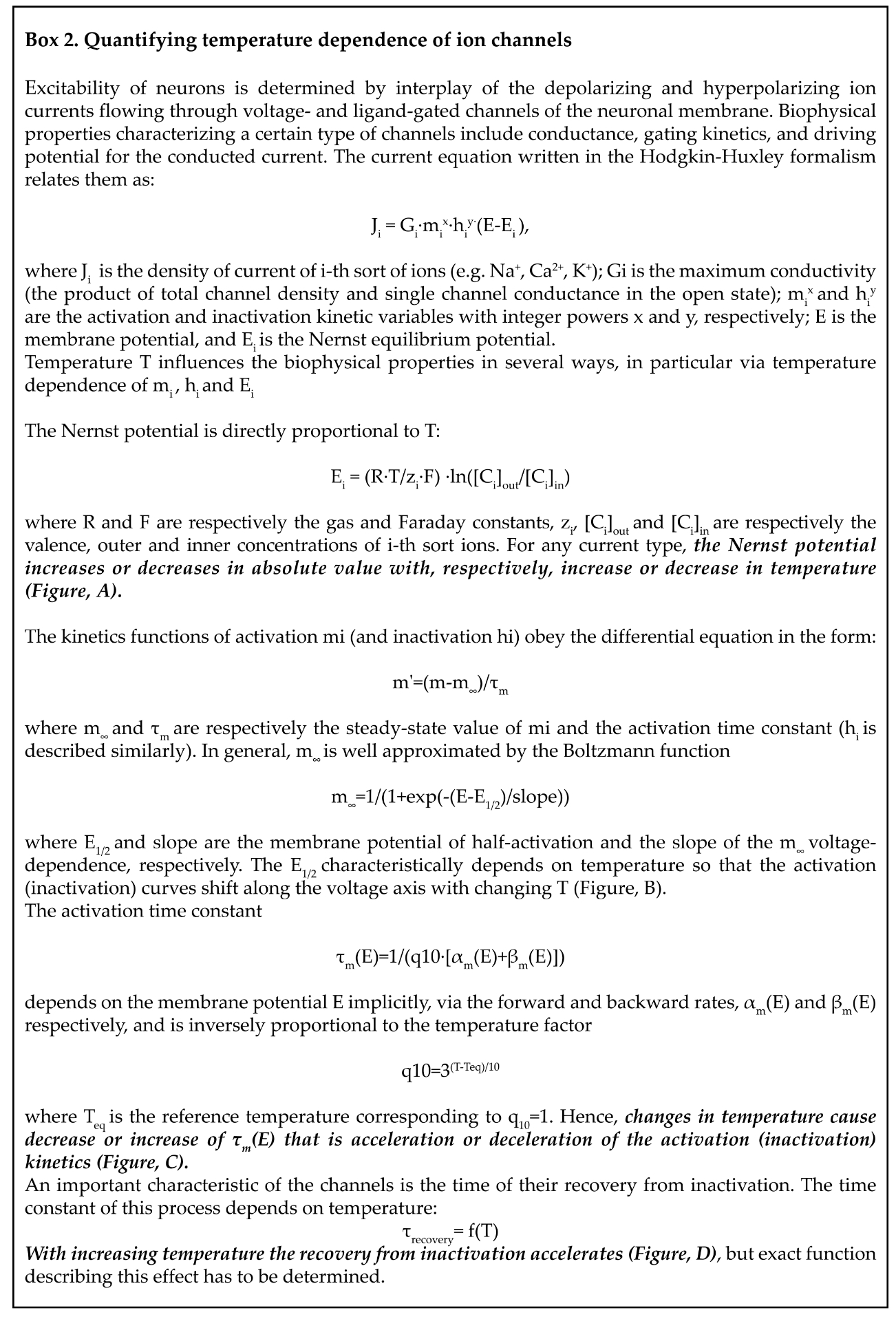