For many decades synaptic circuits have been associated solely with cell-cell neuronal connections represented by the presynaptic terminal, which releases a neurotransmitter, and the postsynaptic neuronal specialization, a site where the neurotransmitter can activate synaptic receptors. However, due to technical limitations these studies usually were linked only to the postsynaptic site. For a long while, the widespread techniques that rapidly advanced neurophysiology have been little used in understanding the way how Ca2+-dependent release of the excitatory neurotransmitter glutamate from neuronal axons can be measured directly. Only with the advance of live cell imaging, it became possible to detect internal Ca2+ dynamics in presynaptic boutons with the high temporal resolution.

The main excitatory neurotransmitter in the central nervous system, involved in many processes occurring in the brain, such as synaptic plasticity, transmission of nerve impulses, training, memory formation, decision making, is glutamate. For the normal regulation of these processes, constant and accurate regulation of glutamatergic signaling should be carried out. Ca2 + indirect release of glutamate from axonal buds of neurons is one of the key mechanisms necessary for the functioning of synapses. Violation of this process leads to impaired brain function and the development of neurodegenerative diseases. Thus, the establishment of a causal relationship between Ca2 + presynaptic dynamics and probabilistic release of glutamate is one of the fundamental tasks of neuroscience. Until now, the study of this mechanism has been severely limited by existing methodological approaches. The limitations of the estimation of Ca2 + -mediated release of glutamate from presynaptic terminals are caused by the small sizes of buds of neuronal axons (their diameter is about 2-3 μm), therefore, studies are usually carried out on isolated cell cultures or on giant central synapses, where axonal buds are physically more accessible for direct experimental sounding. We plan to use a unique modern technology to record the Ca2 + activity of presynaptic buds in surviving sections of the brain. This technique is a combination of patch-clamp technology with the simultaneous display of the fluorescence intensity of the signal and recording the relaxation time of the Ca2 +-sensitive dye Oregon Green BAPTA-1. The new technology for recording dye relaxation time (FLIM) has several serious advantages, such as being independent of photobleaching, changes in ambient temperature, and pH, and it allows reading the change in the dynamic concentration of presynaptic Ca2 + with a high level of resolution in individual neural axons. Using this approach, for the first time it will be possible to assess the contribution of individual neuronal buds to the release of glutamate and will allow us to evaluate the formation of synaptic plasticity from the side of the presynaptic terminal.

Using the patch clamp method, recordings were made from a pyramidal neuron of the hippocampus brain of the BL57 line of 2 months old. Two types of fluorescent dyes were found in the intracellular solution: low molecular weight probe OGB-1 (which allows visualization of calcium when a certain long wave is activated); dye fluo-4. Figure 1A shows an example of such a record. Since the number of photons when using the FLIM technique is small, which negatively affects the signal-to-noise ratio, a spiral scan (shown in Figure 1B) is used. 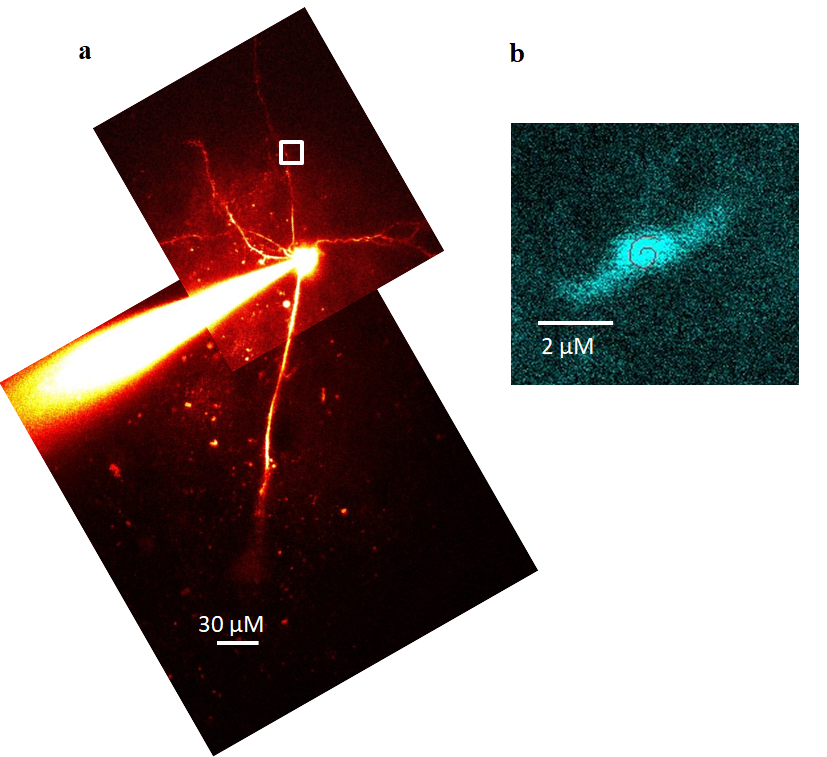 Figure 1. The example of recording a pyramidal neuron.  A. Example of two photon recording (dyes delivered by patch clamp method through pipet). B. Example of spiral scan recording.

To approve the quality of the method, a change in fluorescence was shown in response to the generation of action potentials by a pyramidal neuron. To do this, using the patch clamp method, current was injected into the soma of the cell (time is indicated by red arrows) and, when an action potential occurred, a fluorescent signal was identified in response to the generation of a single AP (Figure 2a) and several APs (Figure 2c). The relaxation time of a fluorophore, for a single AP and several APs, is presented in Figs. 2b, 2d, respectively.

For the successful use of methods with a low signal to noise ratio, it is necessary to use very thin approach to calculate the baseline level of fluorescence. For this purpose, specialized MES software was used. The fluctuation in the basal level of calcium in an individual bud between scan cycles was detected. A comparative analysis of calcium concentration in single and six-fold stimulation of APs was showed. 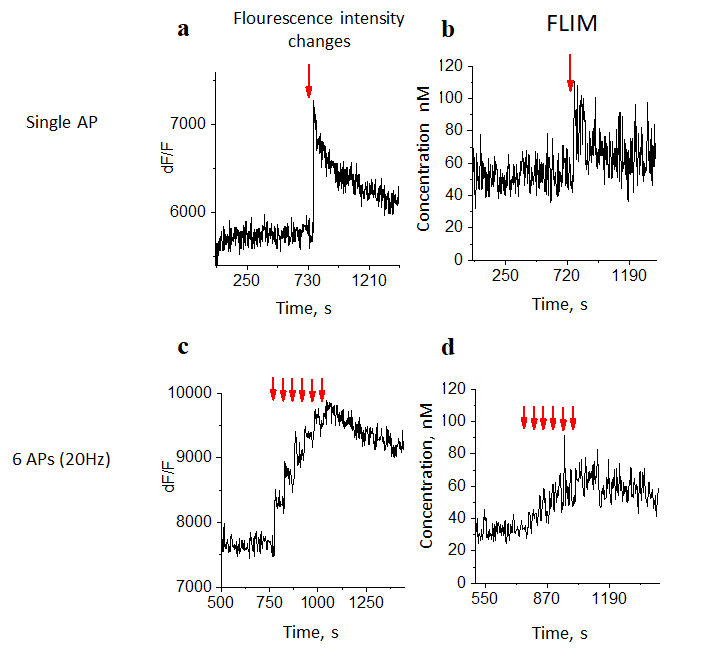 In this work, we developed and tested the change of [Ca2 +] in presynaptic buttons by recording a FLIM signal. Unlike a method of measuring the fluorescence intensity of a signal, the FLIM technique allows estimate the relaxation time of fluorophore molecules, usually occurring in the nanosecond time scale. Fluorophore relaxation time is independent of dye concentration, focus shift, laser power fluctuations, or light scattering in the tissue. Therefore, the FLIM protocol we developed allows us to monitor molecular interactions in organized tissue.

The study was carried out with the financial support of the Russian Foundation for Basic Research in the framework of the research project No. 18-315-00326