Parkinson's disease is a progressive age-associated neurological disorder. One of the major neuropathological hallmarks of Parkinson’s disease is the appearance of protein aggregates, mainly consisting of the protein alpha-Synuclein. These aggregates have been described both in genetic as well as idiopathic forms of the disease. Currently, Parkinson’s disease patient-specific induced pluripotent stem cells (iPSCs) are mainly used for in vitro disease modeling or for experimental cell replacement approaches. Here, we demonstrate that these cells can be used for in vivo disease modeling. We show that Parkinson’s disease patient-specific, iPSC-derived neurons carrying the LRRK2-G2019S mutation show an upregulation of alpha-Synuclein after transplantation in the mouse brain. However, further investigations indicate that the increased human alpha-Synuclein levels fail to induce spreading or aggregation in the mouse brain. We therefore conclude that grafting of these cells into the mouse brain is suitable for cell autonomous in vivo disease modeling but has strong limitations beyond that. Furthermore, our results support the hypothesis that there might be a species barrier between human to mouse concerning alpha-Synuclein spreading.

Parkinson's disease is a progressive neurological disorder. It is the second most common neurodegenerative disease after Alzheimer’s disease. Parkinson’s disease is characterized by motor symptoms including tremor, rigidity, bradykinesia, and postural instability but also by non-motor symptoms as fatigue, depression, sleep disturbance, and dementia [1]. Although some symptomatic treatments exist, no preventive or disease-modifying therapies are currently available. The major hallmark of Parkinson’s disease is the degeneration of dopaminergic neurons in the substantia nigra of the midbrain. It is estimated that about 30  % of the familial and 3-5 % of the sporadic cases are caused by monogenetic mutations [2]. The affected genes including SNCA, PINK1, Parkin, LRRK2, DJ1, ATP13A2 and VPS35 are involved in numerous, very different biochemical processes, emphasizing a complex etiopathogenesis. Among others, cellular processes like oxidative stress, dysfunctional protein degradation and clearance, calcium dysregulation, mitochondrial dysfunction as well as protein aggregation (including prionopathy) have been implicated in the etiopathogenesis of Parkinson’s disease. Although the majority of the Parkinson’s disease cases is of idiopathic origin, the clinical symptoms and the histopathology do not differ from the genetic Parkinson’s disease cases [2]. Therefore, to study genetic cases might serve as a tool to get more insights into the complex etiopathogenesis of the pathology. A major neuropathological hallmark of Parkinson’s disease is protein aggregates that are detectable in many genetic as well as idiopathic cases. These aggregates are called Lewy bodies (LB) and Lewy neurites and consist mainly of the protein alpha-Synuclein (gene: SNCA). Several mutations in SNCA as well as increased SNCA gene doses have been previously described to cause Parkinson’s disease (reviewed in [3]). Interestingly, neuropathological studies suggest that Lewy pathology ascends from peripheral autonomic ganglia to brainstem nuclei and subsequently toward the neocortex over time [4]. The associated prionopathy hypothesis posits that conformationally altered alpha-Synuclein is transmitted between neurons and initiates protein aggregation in susceptible neurons [4]. This hypothesis is supported by the observation that alpha-Synuclein fibrils induce LB pathology in primary neuronal cultures as well as in wild-type mice [5, 6]. However, whether increased levels of alpha-Synuclein in a subset of cells would be sufficient to induce such a prion-like spreading remains unclear so far.
The reprogramming of human somatic cells into induced pluripotent stem cells (iPSCs) was a breakthrough for in vitro disease modeling [7, 8]. iPSCs resemble embryonic stem cells in all their characteristics. Numerous studies used Parkinson’s disease patient-specific iPSCs and thereof-derived neurons to gain insights into the mechanisms underlying the onset and progression of Parkinson’s disease [9]. Among other findings, it was possible to demonstrate that even mutations in Parkinson’s disease associated genes different from SNCA, can cause an upregulation of the alpha-Synuclein protein levels [10]. However, the usage of human iPSC-derived cellular models under physiological conditions, e.g. via grafting in mice, still remains unexplored.
In this study, we used an isogenic pair of Parkinson’s disease patient-specific iPSCs with the G2019S mutation in the gene LRRK2 and transplanted thereof-derived neuroepithelial stem cells (NESCs) into the striatum of mice. We demonstrated that in vivo differentiated neurons showed an upregulation of alpha-Synuclein under physiological conditions. However, we were unable to detect any spreading of alpha-Synuclein in the mouse brain. Our results suggest that human Parkinson’s disease patient-derived iPSC models were able to recapitulate key characteristics of the disease in vivo. Furthermore, they support the hypothesis that murine alpha-Synuclein might actually inhibit seeding and propagation of human alpha-Synuclein.

For surgeries 11-12 week old NOD.Cg-Prkdcscid Il2rgtm1Wjl/SzJ mice were deeply anesthetized by isoflurane (4 % v/v for induction and 2 % v/v for maintenance) and bupivacain (5 mg/kg s.c.) was given as supplementary local analgesia before surgery. Additionally, buprenorphine treatment (0.1 mg/kg; s.c.;) was used as analgesia before and one day after surgery. Two weeks before transplantation, 10 µg 6-OHDA (6-Hydroxydopamine hydrobromide, Sigma Aldrich) was stereotactically injected into the striatum using following coordinates in relation to bregma: anteroposterior: 0.5 mm, mediolateral: 2.0 mm, dorsoventral: 3.5 mm (below skull). Transplantation of NESCs was performed as described before [12, 13]. In brief, NESCs (Passage 10-13) were differentiated towards dopaminergic neurons for 6 days. For transplantation, cells were dissociated to single cells with Accutase and resuspended in N2B27 medium to a concentration of 5 x 104 cells per microliter. Three microliters of the cell suspension was injected into the 6-OHDA-lesioned striatum using a Hamilton 7005KH 5-µl syringe (LRRK2-G2019S n=6, LRRK2-WT n=3).From these iPSC

Perfusion, sectioning, and immunohistochemical analysis were performed 11 weeks post-transplantation as described previously [12, 13]. The following primary antibodies were used: human Nuclei (mouse, 1:200, Millipore), human NCAM (mouse, 1:100, Santa Cruz), and alpha-Synuclein (rabbit, 1:600, Sigma). Alexa fluorophore-conjugated secondary antibodies (Invitrogen) and Hoechst 33342 (Invitrogen) were used to visualize primary antibodies and nuclei, respectively. Sections (40 µm) from the center of the graft were evaluated using a Zeiss LSM 710 confocal microscope. 3D surface structures of the z-stacks taken by the confocal microscope were created using IMARIS software (bitplane). For this, three different ROIs (graft, proximal to graft and distal to graft) were chosen and the values of the threshold (background substraction) were automatically set. The endogenous mouse stainings of the striatal myelinated fibers were not taken into consideration for the analysis.

The volume, the mean intensity, and maximum intensity of every created surface were defined by Imaris software. The average or the sum of the different parameters was calculated for each animal. Ratios of the different ROIs were created as indicated and t-tests were performed using SigmaPlot. n specifies the number of mice and statistical significance is considered to be P < 0.05. Prism 6.01 (GraphPad) was used for data illustration and data are presented as mean + SEM.

Previously, it has been shown in vitro that human neurons expressing the Parkinson’s disease-associated G2019S mutation in the LRRK2 gene have elevated levels of alpha-Synuclein [10]. As a first step, we were aiming at determining whether this is also the case in vivo. Accordingly, we transplanted 1,5 x 105 human iPSC-derived NESCs that were pre-differentiated for the neuronal lineage (for details see Materials and Methods section), into the striatum of 11-12 week old NOD.SCID mice. In order to investigate the impact of the LRRK2-G2019S mutation, we used patient-derived cells expressing this mutation as well as a corresponding isogenic line where the mutation has been corrected. Human cells were distinguished from the surrounding mouse cells with human-specific antibodies against NCAM and human nuclei (Fig. 1A, B). 11 weeks after transplantation in the mouse striatum, we saw robust survival and neuronal differentiation for both lines as indicated with the anti-human-NCAM antibody (Fig. 1A). In order to detect the levels of alpha-Synuclein in the grafted cells, we stained with anti-alpha-Synuclein-specific antibodies (Fig. 1B). For quantification, we reconstructed the surfaces of the alpha-Synuclein signal in the grafts with IMARIS (Fig. 1C). The volume and the intensity of the alpha-Synuclein signal was quantified from the reconstruction (Fig. 1D, E). This quantification revealed that expression of LRRK-G2019S led to a negligible increase in the mean volume of the alpha-Synuclein signal (Fig. 1D). However, the mean and the maximum intensity of the alpha-Synuclein signal was significantly increased upon expression of the Parkinson’s disease-associated LRRK2-G2019S mutation (Fig. 1E). These results indicate that human neurons carrying the LRRK2-G2019S mutation express higher levels of alpha-Synuclein under physiological conditions.

Parkinson’s disease is a progressive disorder characterized by the spreading of protein aggregates, mainly consisting of alpha-Synuclein. It has been hypothesized that this appearance of aggregates spreads in a prion-like fashion [4]. Aggregated alpha-Synuclein has the ability to induce further aggregation of soluble alpha-Synuclein. Hence, a seed of alpha-Synuclein aggregation would be sufficient to start the process.
In order to test whether our in vivo phenotyping approach would be able to recapitulate this spreading process, we analyzed the levels of endogenous mouse alpha-Synuclein in a region close (proximal) to the graft in comparison to a region far (distal) from the graft (Fig. 2A). Accordingly, a 3D surface reconstruction of the endogenous mouse alpha-Synuclein signal was performed with IMARIS (Fig. 2B and C). If alpha-Synuclein indeed had spread from the graft into the surrounding tissue, we would have expected to find significant differences in the volume (Fig. 2D) or intensity (Fig. 2E, F) of the alpha-Synuclein signal in a region proximal to the graft compared to a region distal to the graft when normalizing both regions to the graft.Particularly, we expected to see such differences in cases where cells with the LRRK2-G2019S mutation have been transplanted. Moreover, we compared the ratio of the two regions between the different genotypes. However, in none of the investigated parameters significant differences were detectable (Fig. 2D-F). We therefore conclude that in the here chosen paradigm Parkinson’s disease-associated alpha-Synuclein spreading is not detectable. 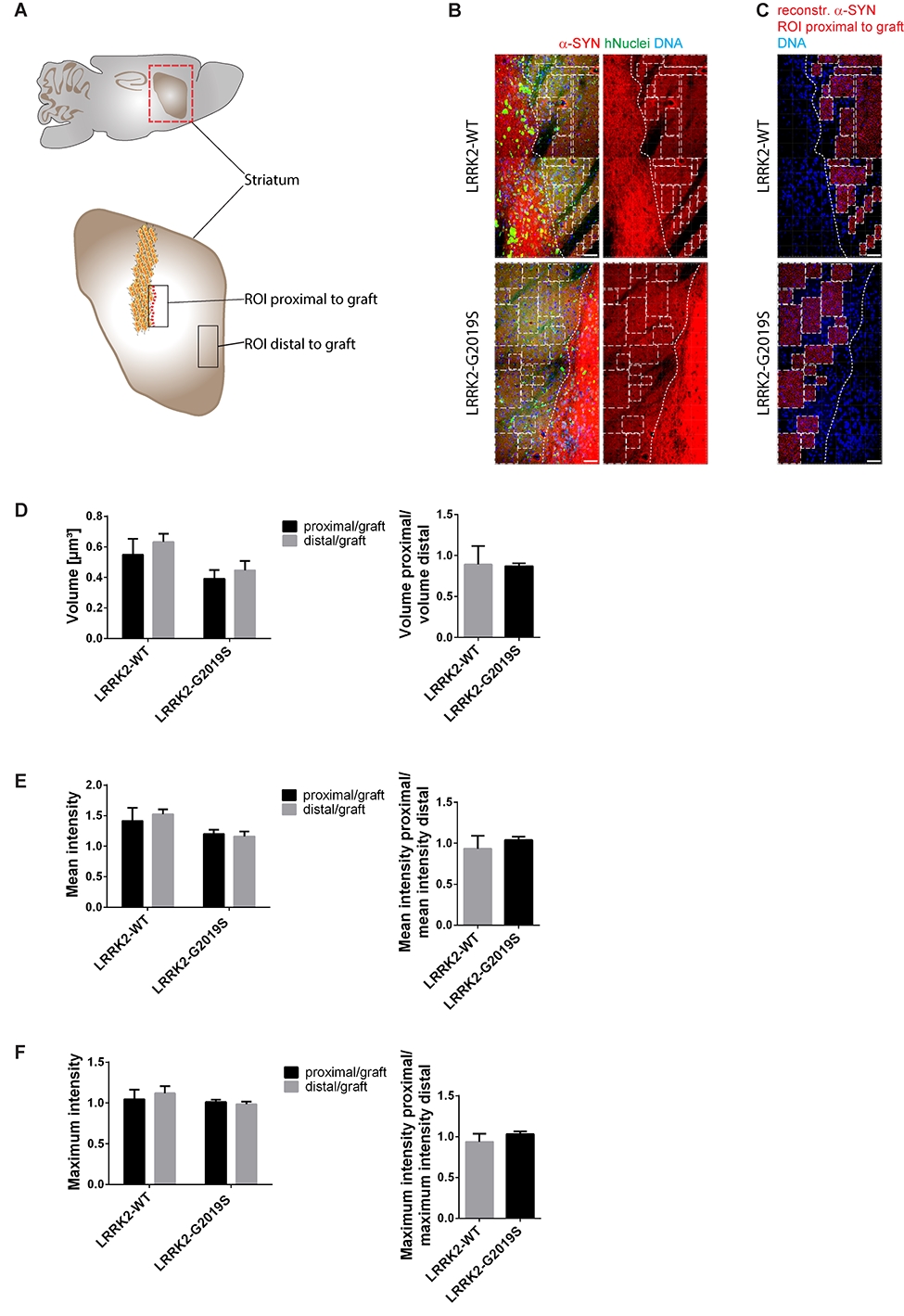 Overall these results clearly indicate that it is of critical importance to choose the appropriate model and tools to study alpha-Synuclein aggregation and spreading. In particular, new human-specific organoid models recapitulating essential features of the human midbrain [21, 22] might represent interesting alternatives for the future. These models will allow combining the advantages of tissue-like specimens (complex system, in vivo, cellular heterogeneity) with high relevance for the human situation, particularly when they are derived from human Parkinson’s disease patient-specific stem cells.

Ethical approval and consent to participate

All work with human iPSCs and thereof derived cells has been approved by the Ethics Review Panel (ERP) of the University Luxembourg as well as by the Luxembourgish Comité National d'Ethique de Recherche (CNER). The CNER reference number is 201305/04
All animal experimentation was approved by the appropriate Luxembourg governmental agencies (Ministry of Health and Ministry of Agriculture).

Availability of data and materials

The datasets used and/or analysed during the current study available from the corresponding author on reasonable request.

The authors declare that they have no competing interests.

KH, SB, and JCS contributed to the conception and design of the study. KH and LMS performed experiments and analyzed data. JCS drafted the manuscript and KH prepared main figures. All authors read and approved the final manuscript.

The JCS lab is supported by the Fonds National de la Recherche (FNR) (CORE, C13/BM/5791363). This is an EU Joint Programme. – Neurodegenerative Disease Research (JPND) project (INTER/JPND/14/02; INTER/JPND/15/11092422). Further support comes from the SysMedPD project which has received funding from the European Union’s Horizon 2020 research and innovation program under grant agreement No 668738. KH received financial support from a private philanthropist as well as from the Fondation du Pélican de Mie et Pierre Hippert-Faber. LMS is supported by a fellowship from the FNR (AFR, Aides à la Formation-Recherche).
The authors would like to thank Inga Brüggemann and Thea van Wüllen for excellent technical assistance. We further acknowledge support through the pluripotent stem cell facility at the LCSB.